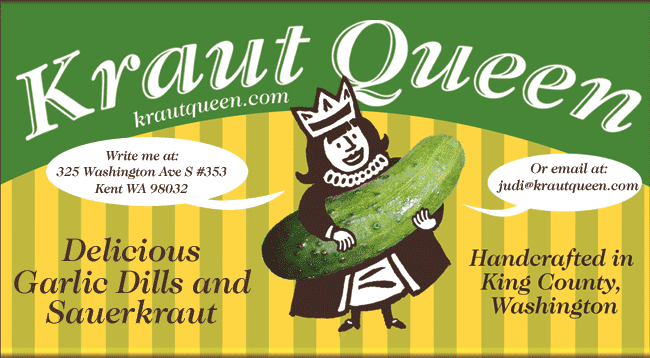 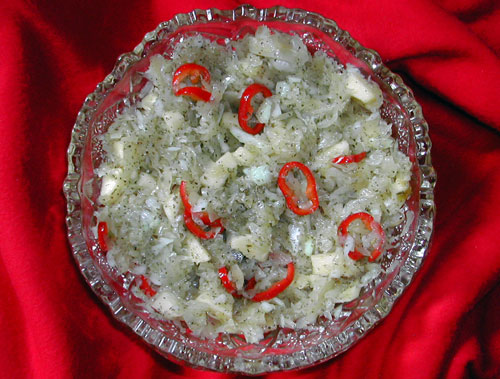 Combine all except oil, then drizzle oil over and toss.
Refrigerate for at least 2 hours. Salt to taste after 2 hours, if necessary.
Serve as is, or spoon into half “shells” of green peppers, tomatoes, etc.

Where did "Krautqueen" come from? 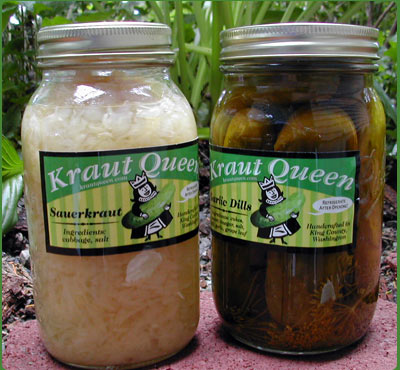 I grew up enjoying "store-bought" sauerkraut with my family. When I learned to make it, I couldn't believe the difference in taste. I shared with friends and family and they were crazy about it too.

I was taught to use late winter cabbage; it's not ready until early fall. This cabbage is heavy and dense, moist and sweet. It averages 7-10 pounds but can really grow quite large. The biggest one I ever bought was 28 pounds! I drive hours to buy from the farms that grow good late winter cabbage.

Each fall, more and more people asked for homemade kraut. One year, I got a wild hair and bought 400 pounds of cabbage! After getting through 400 pounds, I called myself "The Krautqueen". Someone asked me how I became the Krautqueen, what did it mean? I explained it was a self-appointed title because I had turned 400 pounds of cabbage into kraut, more than anyone in Oregon. They challenged with, "how do you know someone else didn't make more?". I replied, "you go out and find someone who made more and I'll surrender my title."

I make pickles too. I really love giving both pickles and kraut to friends and family. I even love making them. I gather all my tools and ingredients, clean my work area, and put on some rock and roll. Tradition dictates that at least one beer is in order during the process.

Now I am back in Washington, my home state. In the fall of 2004, I bought almost 1000 pounds of cabbage at Schuh's farm just outside Mt. Vernon. The variety they grow is "krautman" and it's the best I have ever found. That much cabbage made 740 pounds of kraut. And after years of people saying, "you just HAVE to sell your kraut and dills!" I decided to start my business. What could be better than making extra money doing something you really love?

I always say I think that's what makes my stuff taste good--I put love in every jar.